General Info
Stats & Details Whois IP Whois Expand all blocks
Battlefields of Britain Home | Battlefields of Britain
From the Roman period to the Jacobite rebellions and beyond, the battles fought across these isles have led to dramatic turning points in history. In many cases their impact is still relevant today as they have contributed to the shaping of British laws, institutions and our concepts of identity. This site aims to provide detail on those battles, including interpretation of the action, to aid visitors in their quest to explore and understand thes...
Keywords: wars of the roses, battle of bosworth field, roman battles, battle of falkirk, battle of prestonpans, battles of britain, information of british battlefields, battles scotland, battles wales, battles wars of scottish independence
Aug 4, 2021 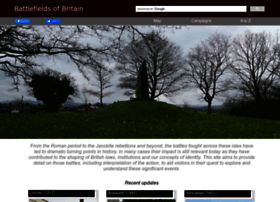