General Info
Stats & Details Whois IP Whois Expand all blocks
The Seventh Academy
he Self-Mastery Discipline is an ancient study, used in Platos Academy, in Confucius approach to his students, in Hindu trainings, in Buddhist monasteries, in ancient Egyptian inner-temple studies, and as a basis for most native traditions that we recognize today. It is the foundation on which many contemporary studies from general metaphysics to meditation are based. But the discipline itself is largely forgotten, having been more or less exting...
Keywords: Plato, spiritual, metaphysical, world religions, shamanism, shamanic, self mastery, Seventh Academy
Jul 12, 2020 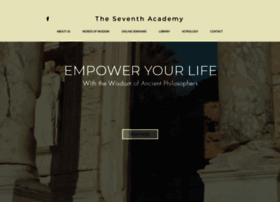