General Info
Stats & Details Whois IP Whois Expand all blocks
THE ROMANS Ancient, Medieval and Modern
John,S,Romanides, The Primitive Greek Romans. The Jews, Romans and Merovingian Franks and the cure of the sickness of religion. Augustine's sickness of religion swamps the Carolingian Franks. Religion is a neurobiological sickness with a specific cure which has been handed down by the prophets and apostles of the Old and New Testaments and preserved by the Fathers of Church. Between 330 and 1453 Constantinople New Rome was the Capital of the Roma...
Keywords: religion, christianity, god, feudalism, Orthodoxy, christ, roman, constantinople, jesus, Romanides
Jul 23, 2021 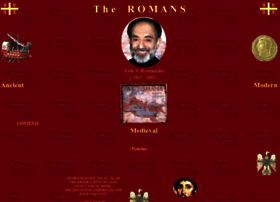